Two Down, One To Go … Three Times A Bridesmaid, Never A Bride
Well, the wedding of all weddings was held somewhat successfully over the weekend. Considering that some very important invited guests only received their invitations the week of the wedding, that the groom only applied for his passport three weeks ago, that the best man found out he was singing a song half an hour before the rehearsal and that the bridesmaid wrote the poem for the reading an hour before the ceremony, after finding out it was required at the rehearsal…. we did it. 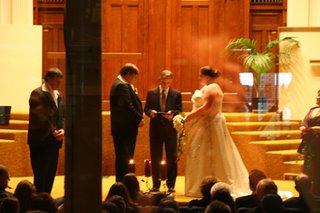 She’s married. She may have lost the garter whilst walking out of the Hilton hotel, forgotten the rings and one of the wedding cars may have broken down but we made it. Sure, her nose stud popped out at the beginning of the reception causing a minor panic and their impromptu first dance was to “You’re just too good to be true.. can’t take my eyes off of you…”, but they are married. Certainly – the invitations could have gone out a little sooner and the dresses only arrived in the country on Monday – but all in all, it’s a success story because they’re hitched and on the plane and that’s all to be said about that apart from … phew. I’m tired.